Our general secretary, Kate Ashbrook, writes about the revival of the inclosure movement.

A century and a half ago we thought the inclosures were coming to an end—about the time that the Open Spaces Society was formed.

Indeed, I said as much in Japan recently to an international audience on commons, and commiserated with those nations that are going through the pain we suffered in our inclosure movement: wild land developed or fertilised, rivers dammed for reservoirs, forests felled, indigenous communities dispossessed.

In reality, we now face a revival of the inclosure-movement. The list of the government’s anti-green attacks on access and open spaces lengthens by the day.

And the environment secretary Owen Paterson is trying to move the goalposts to enable more development in national parks in exchange for something called ‘biodiversity offsetting’.

On coastal access, the ex-environment minister Richard Beynon wobbled last summer when he told farmers at the Royal Cornwall Show, in a bizarre metaphor, that it ‘was a sledgehammer to miss a nut’. He then refused to extend coastal access to the Isle of Wight, claiming it was ‘not a priority’. 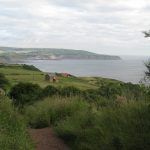 The government has made it even harder to register land as greens in England, with new regulations which favour landowners and developers. Worryingly, the Welsh Government is considering similar moves. We still have no news about how to win ‘Local Green Spaces’—or even if they will be worth winning.

Emasculate
Now the Minister of Justice wants to emasculate judicial review because of its alleged impact on ‘economic recovery and growth’. His proposals would make it much more expensive and difficult for voluntary groups to go to court against misconceived development.

There have been many times when the society, the Ramblers, the British Horse Society and others have taken court action to uphold the public’s rights or to save paths and spaces. Such action is a last resort for us, if only because of the cost, but our freedom to take it is of paramount importance. Is there anything this government won’t do to ease the way for the developers to make more money?

This is all deeply depressing—but remember, this society successfully fought inclosure more than a century ago, and we will again.