One of our members, Andrew Osborne of Faversham in Kent, has played a crucial role in saving a public footpath from being deleted from Kent County Council’s definitive map of public paths.  The decision removes the final legal obstacle to the opening of a continuous walk along Faversham Creek, for which Andrew has campaigned for many years.

Footpath ZF5 crosses the site of the former west yard of Pollock’s barge-building business, an important feature in Faversham’s history.  The business closed in about 1970 and the site was then developed for housing in the 1980s, obstructing the path in the process. 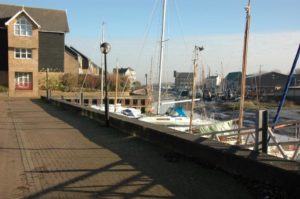 Andrew, with later support from the Faversham Footpaths Group and other residents, led a campaign to re-open the path by diverting it along the creekside. However, the residents of the housing development sought to delete the path entirely.  Two public inquiries backed Andrew’s campaign.

Most recently, the residents claimed that the path had been added to the definitive map in error and applied to the county council to remove the path from the map.  The county council, relying heavily on Andrew’s evidence, argued that no mistake had been made.  In such cases the presumption is that the definitive map is correct and the onus is on the challenger to prove that there was a mistake.

Kent County Council refused to make an order to amend the map, and the residents appealed to the Planning Inspectorate to direct the council to make such an order.

The planning inspector, Alan Beckett, considered the evidence and concluded that there was no new evidence that a mistake had been made.  He therefore dismissed the appeal, and the path remains on the map.

Says Andrew Osborne: ‘I am delighted with the inspector’s decision.  It means that, after some 15 years’ campaigning, the final legal obstacle to creating a continuous creekside walk, which will form part of the England Coast Path, has been removed.

‘I shall now be pressing the county council’s officers, who have been incredibly supportive, to get on with the work required to open the path.  It has been a great pleasure to work with Kent’s rights-of-way team manager Graham Rusling, supported by Laura Wilkinson and Maria McLauchlan, on this appeal.’

We congratulate Andrew for his persistence in fighting this case and we are delighted that he has saved this important, historic footpath for all to enjoy.