We are delighted to have helped save two public footpaths which cross Helmshore Primary School’s playing-fields at Haslingden, Lancashire.

Lancashire County Council, the landowner, wanted to move the paths out of the way. They were only added to the official map of public paths in 2011 and have been blocked ever since by the school’s fencing, to which the county council did not object. The Helmshore Community Action Group (HCAG), with backing from the Open Spaces Society, fought the plan at a public inquiry. In total there were 19 objections. The inspector, Alison Lea, has ruled that the paths should stay where they are.

Lancashire County Council planned to move the cross-field paths to the field edge, on meandering routes. It claimed that having the paths across the field was a risk to security. The inspector found no evidence that this was the case. She rejected the proposal largely on the grounds that the views from the proposed routes were inferior, creation of the paths would result in the felling of trees, and that the diversions were less convenient for the public. She refused to confirm the order. 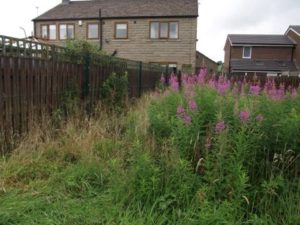 Says Kate Ashbrook, our general secretary: ‘We are relieved that the inspector agreed with us that the existing route of one of the paths is direct and purposeful, and that the public would lose out from the diversions. We congratulate HCAG for its excellent campaign to save these paths which it only recently claimed for the official map.

‘Now that the order has been rejected we must press Lancashire County Council to remove the illegal obstructions. As a public body and the highway authority, as well as the landowner, it should be setting an example by having its paths in exemplary order.’

Says Keith Pilkington of HCAG. ‘Public enjoyment of the paths would have been seriously prejudiced had the diversion gone ahead. It has been our aim since 2005, when the paths were blocked off by the school without any warning, to obtain recognition of historic rights of way and to secure once again a communal open space where children can play. We hope that commonsense will prevail and a compromise acceptable to all sides will be reached. Far too much public money has already been wasted by the county council and we hope this will now be resolved.’

The decision is here.