The Department for Communities and Local Government’s draft order to amend the existing trigger and terminating events was confirmed in the House of Commons and the House of Lords on Tuesday 28 January. The order sets out a time limit for draft plans, Local Development Orders, Neighbourhood Development Orders and Transport and Works Act Orders.The confirmed order can be read here.

The Growth and Infrastructure Act 2013 means that, in England, it is no longer possible to apply to register land as a village green if it has been earmarked for development. However applications which were submitted before 25 April 2013 will be processed.

Before applying to register land as a green you must not only ensure that the land fulfils all the relevant criteria, but you must also check that the land has not been allocated for development.

The current version of our book, Getting Greens Registered, is available as a download and has been updated to reflect the changes as at 12 April 2017. 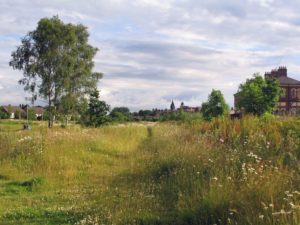 Land at Oswestry, Shropshire, registered as a village green in 2008, shows the benefits of successful registration. The application would probably have been unsuccessful under the new Growth & Infrastructure Act

On Tuesday 22 April the House of Commons will debate the amendments which the Lords have made to the Growth and Infrastructure Bill. There are two which concern us—and they ought to concern MPs because they were promoted by the government at a very late stage. They could have been included in the Bill from the start, giving MPs a proper chance to debate them in committee, instead of leaving them to the last minute when there is little time or opportunity.

1 To reduce from two years to one the period of grace within which a green application in England must be made when its use for recreation is challenged. This is separate from cases of challenge by planning and development which (already, under this Bill), instantly prevent registration as a green.

This amendment affects the existing law. This shows how worthless was the statement made by Baroness Hanham, the Parliamentary Under-Secretary of State, Department for Communities and Local Government, on 30 January 2013 (col 1627):

The new legislation will not affect existing registered greens, which will continue to enjoy the same strong protection as they currently have. Nor is it our intention that the changes will affect applications to register land as a town or village green where there is no proposed development on the land in question (our emphasis).

This amendment does just that. It puts local people at a huge disadvantage, for preparing an application is complicated and time-consuming, and a year may well not be long enough.

The amendment will also reduce from two years to one the period within which an application must be made after a landowner has deposited a statement under clause 15 (previously 13) of the Bill bringing an end to people’s use of the land for lawful sports and pastimes.

We do not yet know how the landowner’s statement will be publicised, there is no guarantee that there will be signs on the land, so local people may not even know that the statement has been deposited. Again reduction of the grace period is grossly unfair.

2 To commence immediately the clause and schedule which restrict the right to register greens. The original proposal was to introduce these two months after the Bill received royal assent, now they are to be commenced as soon as the Bill receives royal assent, giving local people no time at all to apply to register eligible land which is threatened with development (clause 34, previously 31, Lords amendments 31 and 32).

These are spiteful moves driven by the developers’ lobby. They are designed to stop us from registering greens and recording our long-held rights of recreation, even where land is not threatened with development.

Your MP should ask the minister why these amendments have been left to the last minute and why they are needed at all. Please ask your MP to challenge and vote against them.