We have objected to Harrow School’s appeal against the refusal of planning permission for a new science building and sports hall. 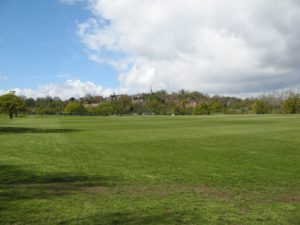 The view of Harrow-on-the-Hill from footpath 58 would be destroyed.

The society, which is concerned to protect public paths and open spaces, considers that the development would have a significant impact on Metropolitan Open Land and the attractive, historic landscape of the area, as well as on the views from public paths across the grounds which the society helped to save from diversion last year.

The impact of this development would extend far beyond the footprint of the buildings, and would have a detrimental effect on the beauty and openness of the Metropolitan Open Land, which is a rare and vital feature of the historic setting of Harrow-on-the-Hill.

The scale of the buildings would be such as to destroy the view of the historic town when seen from footpaths 57 and 58 which cross the school grounds to the east. Last year we fought plans by the school to move these paths off their direct routes, and we won following a public inquiry. The inquiry inspector, Ms Alison Lea, refused the diversions for reasons which included ‘the panoramic view of the listed buildings on Harrow-on-the-Hill available from footpath 57 adds considerably to the enjoyment of the route’, and that footpath 58 heads ‘almost directly to the church spire’. These views, to which the inspector and the objectors attach so much importance, would be destroyed by the development.

Moreover, walkers would be severely inconvenienced by the proposed temporary diversion of the paths in order for the development to be constructed.

The appeal is opposed by CPRE, the Harrow Hill Trust and many other organisations and individuals.