Fifty years ago today, 5 August 1965, the Commons Registration Act became law. The Open Spaces Society had pressed for the registration of commons for decades, and it was one of the principal recommendations of the Royal Commission on Common Land in 1958.

During the passage of the Commons Registration Bill the society secured a number of improvements. Two in particular were important. One, to section 4, enabled any member of the public to make applications to register land as common (initially this was limited to people with a legal interest in the land). The other was a new section 9, which gave local authorities the same power as the owner to protect unclaimed common land. 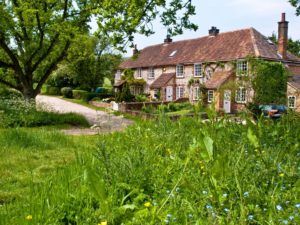 The period for registration of commons and greens allowed by the act was pitifully short, only three years from 1967-70. In 1966 the society and other organisations set up the Central Committee on Commons Registration, to coordinate the registration process, with Dr Brenda Swann, a left-wing activist from the London School of Economics, as its research secretary. We organised a number of weekend schools to train people in the process and employed Alan Mattingly (then a geography undergraduate at Cambridge and later secretary of the Ramblers, 1974-98) to gather evidence for registration.

In our Journal of autumn 1968, Brenda Swann wrote that by the spring of 1968 many commons and greens were not yet on the registers, and so the Central Committee on Commons Registration had a big push to get applications submitted before the end of the free period.  Except for the ‘Archers’, which has resolutely refused to register Ambridge Village Green or any common in its parish, a considerable amount of publicity was obtained,’ she wrote.  All this helped to produce the flood of applications that overwhelmed many registration authorities during the last two weeks of June. Some councils reported receiving half their total number of forms in the month of June.

The short period for registration led to many problems of mistaken registration and omission. But it was a start in the long process of achieving recognition for our unique commons and greens.

Rhyme
Our assistant secretary, Mary (Micki) McArevey, wrote a Rhyme for Registration which we published in the Journal of spring 1967.

The hardy sheep on upland fell
Have no way themselves to tell
That greatly to their owner’s cost,
Grazing rights may well be lost.

The cattle munching winter feed
Unfortunately cannot read.
They dream of spring when they can stand
In lush, green grass on common land.

The ghostly barons haunt at nights
Anxious about manorial rights.
While Happy Hampstead is the joy
Of every London girl and boy.

Three years is all too short to save
A part of British heritage,
So register with seemly haste
The commons, greens, manorial waste.