Although over 60,000 school children visit the national parks each year, the government has long promised increases to this number. The Society, as a member of a coalition of five charities including Campaign for National Parks and with celebrity support, has now demanded urgent action to more than double the number of school children who get to visit the national parks each year.
In an open letter, 17 celebrities including TV legends Carol Vorderman and Caroline Quentin, TV naturalists Liz Bonin and Lizzie Daly, Scottish wildlife film-maker Gordon Buchanan and the former Poet Laureate Sir Andrew Motion, potter Emma Bridgewater and the Campaign for National Parks vice-president, the writer Richard Mabey, call for the government to take action.
Actress and president of Campaign for National Parks, Caroline Quentin said: ‘In this letter we’ve said very clearly that now is the time to take real action to get more children into the beautiful National Parks. 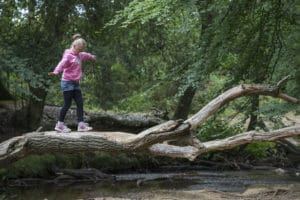 ‘I want school children to be inspired to love nature, adventure and the beauty of the countryside. As anyone who has visited the wilds of Exmoor or the Lake District knows, the National Parks are well placed to do this.’
The charities behind the letter are celebrating the 70th anniversary of the act of parliament that created national parks, as some of the original organisations that came together to found them. Seventy years on from the legislation, Open Spaces Society, Campaign to Protect Rural England, the Campaign for National Parks, Ramblers and the Youth Hostels Association are calling for government action to safeguard their future.