Heathland, by Clive Chatters (Bloomsbury, 2021, hardback and Kindle, both £35, but with good deals available).

This is the latest edition in the British Wildlife Collection. In accordance with the exacting standards of this series, it is beautifully designed, uncluttered and attractively laid out, and with many hundreds of colourful images interspersed throughout. 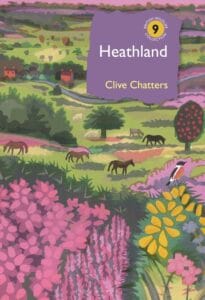 Despite the detail of its 400 pages (and extraordinary weight) it is eminently readable. Clive writes impeccably in a bright and engaging way, making the subject matter compelling and comprehensible, with occasional intriguing turns of phrase.

Having given an outline of the prehistoric origins of heathland, the book focuses on the plant and animal life associated with it in different parts of mainland Britain. Clive presents heathland as a cultural landscape, intimately associated with those pastoral communities who occupied what he calls a ‘landscape of leftover’, after the landowning élite had divvied up the best lands. Clive also embraces the artistic interests of heathlands, exploring them in prose (such as in the works of Thomas Hardy and Shakespeare), poetry (John Clare), and paintings (Constable).

Nearly all the pictures are excellent, and many are truly spectacular. Very occasionally an image is computer- enhanced beyond the credible, and just a few have dateable cars or other features in the background.

A minor criticism is that it would have been good to have seen each photograph labelled with its county, for those of us who struggle to recall where Wingletang or Porth Melgan is located, and with a few helpful maps. The text rarely refers to the pictures which lie alongside it, although they are always relevant and the two complement each other well.

While there is an exploration of how inclosure enabled heaths to be converted to intensive agriculture, more emphasis could have been given to how heathland was, and remains, heavily dependent on commoning for its very survival.

Overall, this volume represents a substantial yet accessible body of work, meticulously investigated and understood, and attractively presented to the highest of editorial specifications. More than anything Clive shows that he is at the leading edge in a long tradition of British naturalists, who enthuse about, reflect on, and celebrate the importance of these iconic landscapes.      Graham Bathe

The authors, Edward Cousins, Richard Honey QC, and our own Hugh Craddock, have produced a welcome update on registration of common land and rights of common, and the management of and access to common land. The book, which is part of the publisher’s Property and Conveyancing Library, is essential reading for practitioners in this complex area of law. 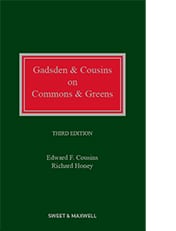 Gadsden was researched and written in the anticipated run-up to new legislation following the report of the Common Land Forum 1986. It took another 20 years for the Commons Act 2006 (CA 2006) to reach the statute book, and its slow roll-out meant that there is continuing over-complication in the exercise and interpretation of legal principles and the law of commons registration.

The Commons Registration Act 1965 (CRA 1965) still remains on the statute book for the majority of commons registration authorities but, in the nine pioneer areas and in Wales, part 1 of CA 2006 is in force to a large extent. This causes difficulties as the provisions thus vary across England and Wales.

The chapter on Wales refers to all the relevant acts, reflecting the increasing divergence of laws following devolution. However, the chapter is disappointingly sparse and contains the statement that ‘parts of this book that concern CA 2006 state the law in England, and may not be applicable in Wales’, leaving the reader no wiser.     Nicola Hodgson

Even during some of the most radical reforms to the planning system in the post-war period, national parks and areas of outstanding natural beauty (AONBs) remain largely insulated, and this book guides the reader through what makes planning policy distinctive in these protected areas. There is a careful analysis of national planning policy guidance for both England and Wales, with reviews of the key legal cases. 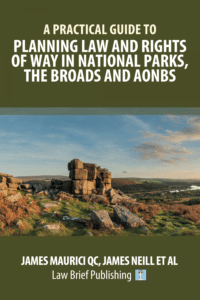 The authors must have felt that the volume was too slim, and so there are further chapters on water, public rights of way, and ‘other access rights in the National Parks’. While these chapters are brief, they are accurate enough, as one would expect from a book produced by barristers from Landmark Chambers. But it is hard to see how they belong, because there is nothing distinguishable in the chapter themes within and without the protected areas.

Indeed, the solitary power available especially to national park authorities to institute traffic regulation orders on public rights of way is not mentioned, nor is the practice of many highway authorities to delegate rights-of-way functions to the park authority. There is also a want of thorough editing—eg references to ‘the 1949 Act’, ‘NPAC’, ‘NPAC 1949’, or spelt out in full.

That said, if you are looking better to understand how planning policy is applied in national parks and AONBs, look no further. But don’t buy it just for the additional chapters.  Hugh Craddock