The Open Spaces Society and the Friends of Haven Green are furious that the Environment Secretary has approved a retrospective application from Ealing Council to use part of Haven Green common as a cycle hub, and to deregister 188 square metres of the common.  The decision follows a four-day public inquiry held in March and April 2017, at which the inspector, Alan Beckett, acted on behalf of the environment secretary.

Ealing Council had made an application under section 16 of the Commons Act 2006 to deregister the part of the common which was occupied by the cycle hub.  The council should have obtained ministerial consent for works on common land, under section 38 of the Commons Act 2006 before building the hub on the common but it failed to do so.  The section 16 application was intended to legitimise the unlawful works.

If the area to be deregistered had exceeded 200 square metres the council would have been required to provide suitable land in exchange.  However, the Department for Environment, Food and Rural Affairs’ Common Land Consents Policy states that consent for deregistration where no replacement land is offered will only be granted in exceptional circumstances, and only if there is a compelling reason why this is not possible.

The objectors at the public inquiry included the Friends of Haven Green, the Central Ealing Residents’ Association, Ealing Civic Society, the Open Spaces Society and a number of individuals. 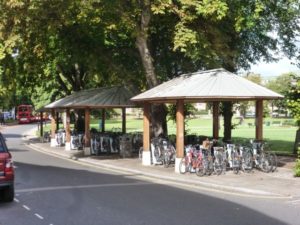 The cycle hub on Haven Green

The objectors argued that the land occupied by the bike stands ought to be available for public access, on foot and horseback, and as a means of reaching other nearby parts of the common.  The hub impeded access across the common and obstructed the open views.  There were no exceptional circumstances or compelling reasons why exchange land could not be offered and there were other equally-suitable locations for cycle parking nearby.

Dismissed
However, the inspector dismissed these comments and considered that the loss of this common ‘would not have any significant adverse effects’ on the interests of the public and the neighbourhood.  He considered it highly likely that once Crossrail commences operations, the demand for secure cycle-storage will increase.

Says Will French of the Friends of Haven Green: ‘We consider this to be a serious setback.  The inspector has found it to be in the public interest to deregister this prominent corner of Have Green common in order to accommodate the pressures on Ealing Broadway station that Crossrail is expected to create.

‘Common land is statutorily safeguarded for the enjoyment and recreation of the public.  One thing that the inspector firmly rejected is that the cycle hub has anything to do with recreation.

‘The council was fully aware of the green’s common-land status before it installed the cycle hub but it refused at the time even to acknowledge it and failed to obtain consent for works on the common. ‘In deciding to allow the deregistration without any offer of exchange land, the inspector was swayed by the current circumstances and the pressures to be created by Crossrail—we feel that to be perverse given that the hub was built before Crossrail was planned here.  Although 188 square metres might seem a small area, this is only a small common and the hub occupies about one per cent of the total area—which is significant.

‘We are sorry that Ealing has been rewarded for installing the hub without consent.  We fear now that this decision may create a precedent for other threatened areas of common land in London; with development pressures and high land-prices nowhere is safe.’

Adds Kate Ashbrook, our general secretary: ‘We fought a strong campaign to defend the public interest and it is sad that the inspector has rejected our arguments.  The people of Ealing will be the poorer for the loss of part of their open space, and we shall have to be vigilant to ensure that similar depredations do not occur on other London commons.’