We held our AGM in London on 5 July with 38 members of the society present.

The AGM chairman, our vice-president Paul Clayden, opened the meeting by pointing out that not only was today the seventieth anniversary of the National Health Service, but we had two days ago celebrated the fiftieth anniversary of the Countryside Act 1968. This empowered local authorities to create country parks so that people could enjoy informal recreation close to home. Now, in these times of austerity, our parks were under unprecedented threat of sale, neglect and commercial abuse. The act also improved the law on rights of way but this was still not being fully upheld. The society would continue the campaign to ensure that all the aims of the 1968 act were achieved.

The meeting approved an amendment to our articles of association so that in future the voting for trustees will be by ballot. 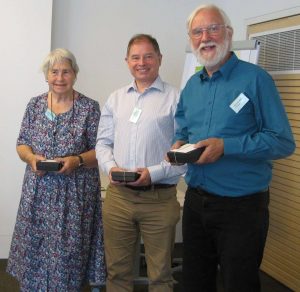 Trustees (from left) Diane Andrewes, Phil Wadey & Graham Bathe stood down at our AGM and each was presented with a hand-made wooden paperweight as a small token of the society’s appreciation for their hard work and dedication to the cause

Trustees
Four trustees stood down: Diane Andrewes, Graham Bathe, Mary Traynor and Phil Wadey. Diane, Graham and Phil had all complete two terms of three years after which they are required to stand down for at least a year. Mary Traynor was retiring due to personal circumstances.

Diane, Graham and Phil were present at the meeting. On behalf of the society the general secretary thanked them for their significant contributions, wise advice and dedication to the cause. She presented them each with a hand-made wooden paperweight as a small token of our appreciation.

Following a ballot, Chris Beney, John Hall and Chris Meewezen were elected as trustees. You can read about them here.

After the AGM members took part in a discussion led by trustee Hilary Hunt about our next strategic plan.

Talks
This was followed by a number of talks as follows.

• Commercial use of parks: Simon Hunt, chair of the Friends of Finsbury Park

• That OSS should research and publish a document to evaluate claims that only 8% of Britain is built on and that OSS should campaign for a truly universal right to roam similar to the 2003 Scottish legislation: Vic Parks