We held our annual general meeting in London on 11 July with 40 members of the society and seven members of staff present.

Chris Beney, our chairman, chaired the event.  He opened the meeting by pointing out that town and village greens were under unprecedented threat.  The court of appeal had recently ruled that land at Vowley View, Royal Wootton Bassett in Wiltshire could not be registered as a green because it was vaguely identified in the local plan as eligible for potential development.  Two test-cases were due to be heard in the supreme court on 15 July to determine whether land held by public authorities could be registered.  The result could be far reaching and put many greens at risk. 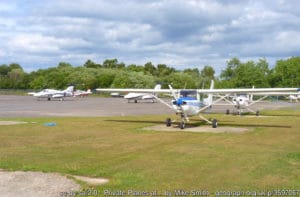 Blackbushe airfield. This is part of the hardstanding on Yateley Common which is alleged to be the curtilage of the control tower. Photo: © Mike Smith, Creative Commons Licence.

Our general secretary, Kate Ashbrook, spoke about the work of the staff and local correspondents, highlighting the seventieth anniversary of the National Parks and Access to the Countryside Act which introduced definitive maps of public paths as well as national parks and areas of outstanding natural beauty.  We were working hard to submit applications for paths before the 2026 deadline.  She also mentioned the Agriculture Bill which had stalled due to Brexit, and our two legal cases, at Leigh Common in Dorset, and Blackbushe, at Yateley Common in Hampshire.

The annual report and accounts were approved.

After a ballot three trustees were elected: Graham Bathe and Phil Wadey (standing again after a year off) and Steve Warr (our treasurer who has completed one three-year term).  John Lavery and Jean Macdonald both stood down and we thanked them for their service. 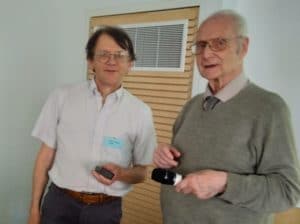 Chris Beney (left) presents John Lavery with a gift in appreciation of his time as a trustee.

The AGM passed three special resolutions to amend the articles.  Two were to tidy up the wording, one more substantive one extended the terms of trustees to three three-year terms (instead of two three-year terms) before they were required to stand down for at least a year.

The AGM closed after one hour and we then enjoyed the following talks:

The trustees met briefly after the AGM and elected Phil Wadey as vice-chairman, with Chris Beney continuing as chairman and Steve Warr as treasurer.  They also agreed to co-opt Tara-Jane Sutcliffe for a further year.

The signed minutes are here.